No. 1-3 Grosvenor Square is amongst the most high profile residential developments in London’s capital. On completion in December 2019, it provided 48 residential units with on-site leisure amenities at one of the most prestigious addresses in Mayfair, London.

Eric Parry Architects’ award-winning design was complemented by Yabu Pushelberg’s luxury interiors. The Neo-Georgian facade was taken down and meticulously rebuilt, brick-by-brick, whilst raised ceilings and enlarged windows further enhanced the scale and grand proportions of this landmark building. 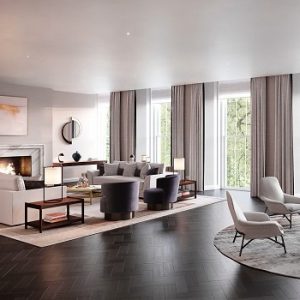 Lodha purchased the former Canadian Embassy site in 2014 and in 2015. Westminster City Council granted consent for its complete redevelopment.